‘When will automation take over the trucking industry? Scientists now have an estimate’ – Mic, Online 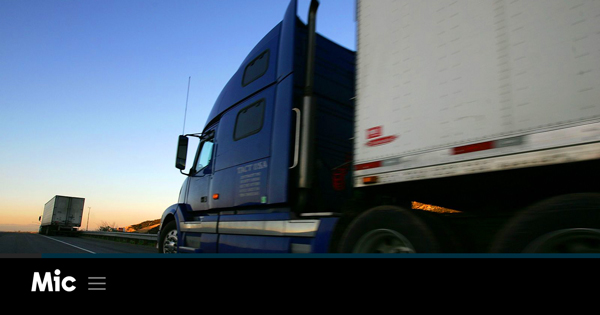 Image: Uber-owned Otto is perfecting the technology that will let trucks drive themselves.
Source: Tony Avelar/AP

There’s no shortage of studies and analysis suggesting that robots can potentially take our jobs. But exactly how far away are we from losing our livelihoods to automation?
Artificial intelligence experts with the BBC surveyed 352 scientists about automation, including some of the world’s leading experts on machine learning. According to the BBC analysis, there is a 50% chance that machines can take over all human jobs in 120 years.
But some fields are at greater risk than others. Let’s focus on one big one: trucking.
Truck drivers may be replaced by automated technology as early as 2027. According to the researchers, artificial intelligence could be maneuvering trucks on the road within the next decade.
“All jobs are being impacted by technological change — some more than others,” said Nicholas Wyman, CEO of the Institute for Workplace Skills and Development and author of Job U: How to Find Wealth and Success by Developing the Skills Companies Actually Need. “Driverless trucks are now used extensively in the mining industry and it’s certain this technology will impact other parts of transport and distribution.”
Estimates from the American Trucking Association suggest there are 3.5 million professional truck drivers in the United States and the industry, as a whole, employs more than 8.7 million people. According to the Los Angeles Times, 1.7 million American truckers could be replaced by self-driving trucks over the next decade.
Trucking jobs are the most common jobs in 29 out of 50 states in the U.S., and there are millions of people working for the trucking industry in non-driving positions.
It’s not such a far-fetched idea, as progress is being made in automating truck driving. Take self-driving truck company Otto, which was created by former Google employees and acquired by Uber last August. The company’s system lets trucks drive for long stretches of time without needing a human driver. The technology was successfully tested in Colorado in October when a self-driving truck delivered 50,000 cans of Budweiser.

If perfected, autonomous trucks could offer heightened efficiency and safer roads; one in seven fatal truck accidents is caused by driver fatigue. For those currently in the trucking industry, it’s not all bad news. How much of a threat self-driving trucks pose to drivers depend on the level of automation: if drivers are still required to be in trucks, then jobs are secure, MIT Technology Review reports.
Wyman says truck drivers need to be open to adapting to the changing landscape of their field. “They need to embrace change — it’s happening so hoping it will go away is not an option,” Wyman said. “Truck drivers should look for opportunities to refresh and reboot their current skill sets.”
Article:https://m.mic.com/articles/180310/when-will-automation-take-over-the-trucking-industry-scientists-now-have-an-estimate#.wEFiIXVUA

« ‘This New Trump Plan Could Be the Answer to Millennial Job Woes’ – Fortune Magazine, Online
‘A Career Pathway To Educational And Employment Success’ – Forbes, Online »