The One Thing Electricians, Chefs, and Entrepreneurs Have in Common

You’d be hard-pressed to name three jobs that seem to have as little in common as an electrician, a chef, and an entrepreneur. But even though the work couldn’t be more different, these jobs share one important trait: they all require practical skills that can be gained through hands-on experience in the real working world, not just books or theory or classroom study.
These are just a few of the well-paid, middle skills jobs that represent the opportunities of tomorrow. Many people think of middle skills jobs as menial, low-paying jobs with no opportunities for advancement. This couldn’t be farther from the case. The reality is that today, there is a bevy of respectable, well-compensated, upwardly mobile careers that don’t require a traditional four-year education.
In many countries, vocational study unfortunately has a history of being seen as less respectable than attending university. But with unemployment and underemployment rates of college graduates at such high levels in the U.S. and elsewhere, it’s time for this perception to change. It’s time to spread the word that skills training, perhaps now more than ever, is possibly the most reliable pathway to an interesting and rewarding career. 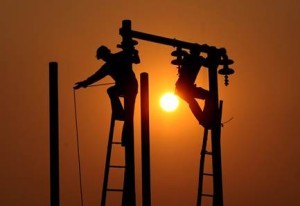 1. The traditional four-year degree is leaving many people in the cold.
If you’re weighing the investment in a four-year degree versus the cost of skills training, consider these figures: right now, for every 100 college graduates in the U.S., there exist only 57 jobs that require a degree. This leaves 43 out of every 100 college graduates faced with unemployment or underemployment. These individuals invested an average of US$120,000 into their degree, much of it borrowed. But rather than transitioning directly from school to a well-paying job in their chosen field, they now have to take whatever job they can to pay back their loans.
In many cases, college graduates are forced to take short-term or low-wage jobs just to keep up with their debt. Many graduates even move back home due to financial pressures. According to a 2014 Gallup Poll, 51% of American adults between the ages of 18 and 35 are living with their parents.
On the other side of the scale, apprenticeship and on-the-job training allows candidates to earn while they learn. Rather than shelling out or borrowing significant amounts of money for your education, you can jumpstart a career while putting money in your own pocket.

2. An increasing number of job opportunities don’t require a college degree.
Even as college graduates face unemployment and underemployment, hundreds of thousands of jobs that require only high school, plus vocational training, remain unfilled. At the moment, 61% of all available jobs in the U.S. don’t require a college degree. And these aren’t just minimum-wage, dead-end, or revolving-door jobs that no one wants to do. Many of the available jobs are in prestigious and interesting fields like health care, electronics, building, manufacturing, design, and culinary arts. Jobs that can be acquired with on-the-job training or apprenticeships are even increasing in fields such as biotechnology, horticulture, and computers.
In Silicon Valley, for example, many smart entrepreneurs are adapting to the reality that a college education doesn’t necessarily equip graduates with the skills to be a great employee, making certain jobs formerly associated with a four-year degree attainable through skills training. Take LaunchCode, for example, a Missouri-based firm that has partnered with large companies like Monsanto (who need computer programmers) to match people who have basic programming skills with more experienced programmers for further training. At the end of their two-year paid training period, these apprentices are ready for jobs as coders.[1]
These days, you don’t even necessarily need a college degree to work at a place like Google – a company well known for being one of the most selective and desirable employers on the planet. According to Lazlo Bock, the senior vice president of people operations (a twenty-first-century term for human resources) at Google, an increasing percentage of Google’s new hires have not, in fact, graduated college. When evaluating candidates, instead of a high GPA or fancy diploma, Google looks for practical skills and expertise, problem-solving ability, humility, a desire to lead, and the willingness to learn.
And the demand for skilled people in the tech industry is only going to increase in the coming years—opening the door for more training opportunities that do not require four years of college study.

3. Opportunity for Exciting, Real-World Experiences.
Skills training provides incredible opportunities for all kinds of hands-on learning experiences. Have you ever dreamed of traveling and seeing the world while learning a profession? Or studying business with a Fortune 500 executive? How about apprenticing with a master chef? Many traineeships and apprenticeships provide exciting opportunities outside the classroom. Skills training, in other words, not only builds solid career futures, but also opens doors to life-enriching experiences like these.
Personal and economic success is coming to more and more people through practical skills training—and that’s another thing an electrician, a chef, and an entrepreneur have in common.

« Four Popular Myths That May be Keeping You from Your Perfect Job …And Why it’s NEVER Too Late to Follow Your Dream
The One Thing George Lucas, Frank Gehry and Hall-of-Famer Nolan Ryan Have in Common »